In the last decade, rapid advances have been made in the field of PET radiochemistry with development of novel tracers targeting different cellular pathways. Each radiopharmaceutical has its unique physiological distribution.

Scroll down for answer 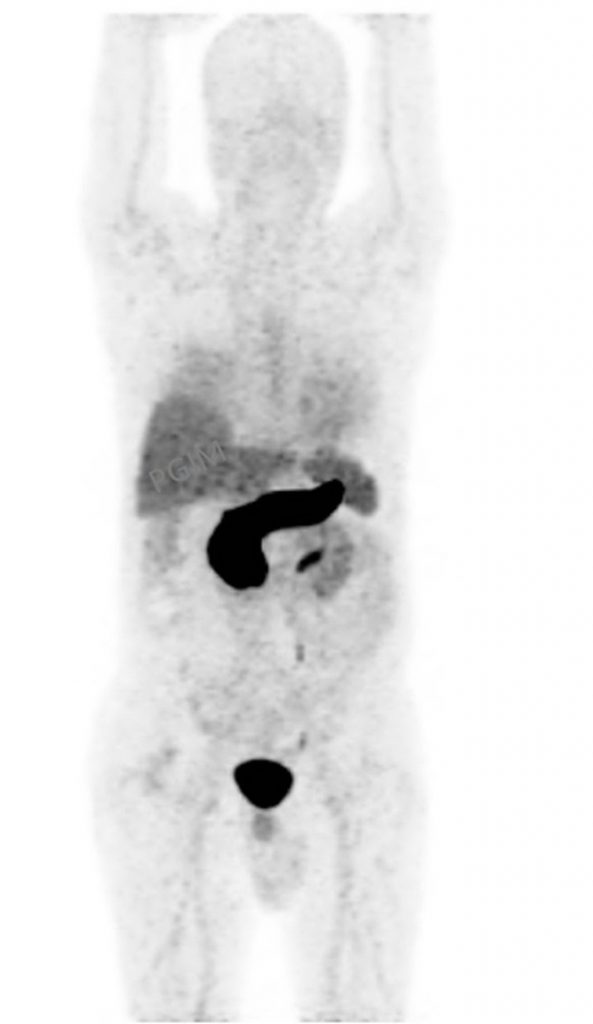 68Ga-RM2 [68Ga-labeled DOTA-4-amino-1-carboxymethyl-piperidine-D-Phe-Gln-Trp-Ala-Val-Gly-His-Sta-Leu-NH2] is a synthetic bombesin receptor antagonist that targets the gastrin releasing peptide receptor. Gastrin releasing peptide receptors are highly expressed in several human tumors including prostate cancer. Gastrin releasing peptide receptor are expressed in 63% to 100% patients of prostate Ca. 68Ga-RM2 has the highest physiologic uptake in the pancreas followed by moderate uptake of the tracer in the liver, spleen and urinary excretion. It has garnered interest as a target for prostate theranostics, especially due to lack of salivary gland uptake which is prominently seen in 68Ga-PSMA PET. A recent study examined the use of [68Ga]RM2- PET/CT (GRPR antagonist) in patients with known biochemical recurrence of prostate cancer and negative or equivocal [18F] fluoroethylcholine-PET/CT and demonstrated that [68Ga] RM2-PET/CT was helpful in localizing the recurrence in such cases (1-2).

Fluciclovine is the synthetic alicyclic amino acid analog of l-leucine, which targets LAT1 and ACST2 transmembrane amino acid transporters, both of which are over expressed in prostate cancer cell. The highest physiologic tracer uptake is seen in the pancreas (lower intensity to 68Ga-RM2). However, this uptake decreases within 15 minutes after injection of the radiopharmaceutical such that the avidity of the pancreas decreases to a level lower than that of the liver. The liver has the second highest physiologic activity. There is moderate salivary gland and pituitary gland uptake and variable mild to moderate bowel activity. An advantage of 18FFluciclovine is its excretion into the urine is very little, which leads to less interference and improved evaluation of potential recurrent disease in the pelvis. Two tissue types demonstrate dynamic uptake, which changes during the course of the scanning examination: Red marrow activity peaks at a moderate intensity 10–15 minutes after the injection and decreases over time.

Conversely, muscle uptake is mild during the early phases of the examination and increases over time (3).

Glucagon-like peptide-1 receptors (GLP-1R) are highly overexpressed in insulinomas and glucagonomas. 68Ga-NOTA-exendin-4 PET/CT targets GLP-1 receptors for the identification of occult insulinoma. On 68Ga-Exendin PET, intense physiological distribution in the kidneys and bladder due to urinary excretion, moderately elevated uptake is apparent in the proximal duodenum and mild uptake is seen in pancreas at 1 h after injection of 68Ga-NOTA-exendin-4 (4).

Used for angiogenesis imaging, 68Ga-NODAGA-RGD images demonstrated significantly higher uptake in the spleen and kidneys compared to 18F-FDG, while the uptake is lower in the brain, the parotid glands, the mediastinum, the myocardium, the lung, the liver, the psoas muscle, and the bone. Significant tracer uptake is not seen in pancreas (5).