18F-FDG PET/CT of brain was done to exclude the cause of aphasia .

What is the most probable diagnosis on  18F-FDG PET-CT findings? 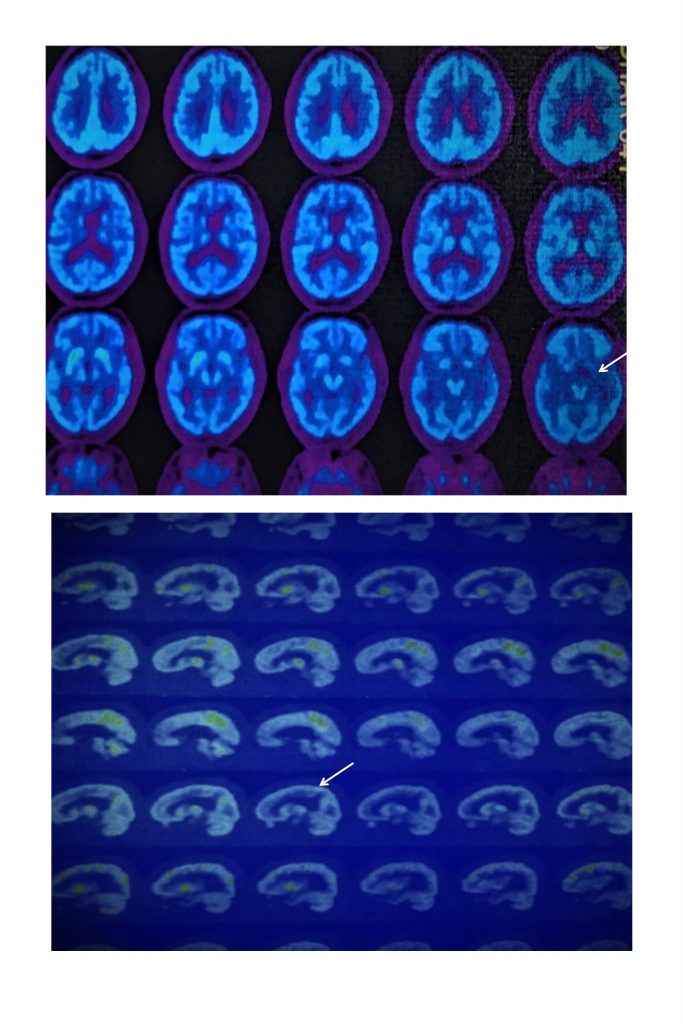 Scroll down for correct answer

Figure  18F-FDG PET/CT of brain was done to exclude the cause of aphasia .and other movement disorders and demonstrating hypometabolism of the medial frontal lobes, anterior cingulated gyrus and temporal lobes. Significant hypometabolism was noted in left perisylvian gyri

Progressive fluent aphasia was this patient’s sole or predominant deficit during the first few years of his illness. Aphasia usually results from lesions that involve the perisylvian cortex of the language-dominant hemisphere. It is characterized by deterioration in language function while other higher center functions are preserved, at least initially. The most common causes of aphasia are vascular lesions, especially ischemic stroke, and trauma. In the case of vascular disturbances, the onset is typically sudden, usually followed by gradual improvement and sometimes complete recovery. This patient had no history of head trauma, which can result in the sudden onset of aphasia but with a somewhat better prognosis than that due to stroke. These courses of aphasia are very different from that of our patient, in whom the aphasia began insidiously and progressed gradually over a period of years. The syndrome of primary progressive aphasia (PPA) is a classic example of a focal cortical degeneration and has been classified as asymmetrical cortical degeneration syndrome.[1] Clinical profile is that of a gradually progressive deficit in language function with a relative sparing of other intellectual functions.[2]. The imaging studies showing left perisylvian atrophy were initially thought to be the hallmark of the syndrome [3,4]. Sinnatamby et al studied the neuroradiological findings in 13 patients of PPA and reported focal atrophy in left perisylvian atrophy in 4 out of 10 patients on CT scan and in 10 out of 12 patients on MRI.[5] .Positron emission tomography can detect early functional changes in the brain before anatomical changes are obvious on computed tomography.