40 years old female, a recently diagnosed case of carcinoma of right breast underwent F-18 FDG PET CT for staging.  It showed an FDG avid lesion in upper medial quadrant of right breast. In addition the following findings (white arrows) were seen in clavicles; what is the diagnosis? 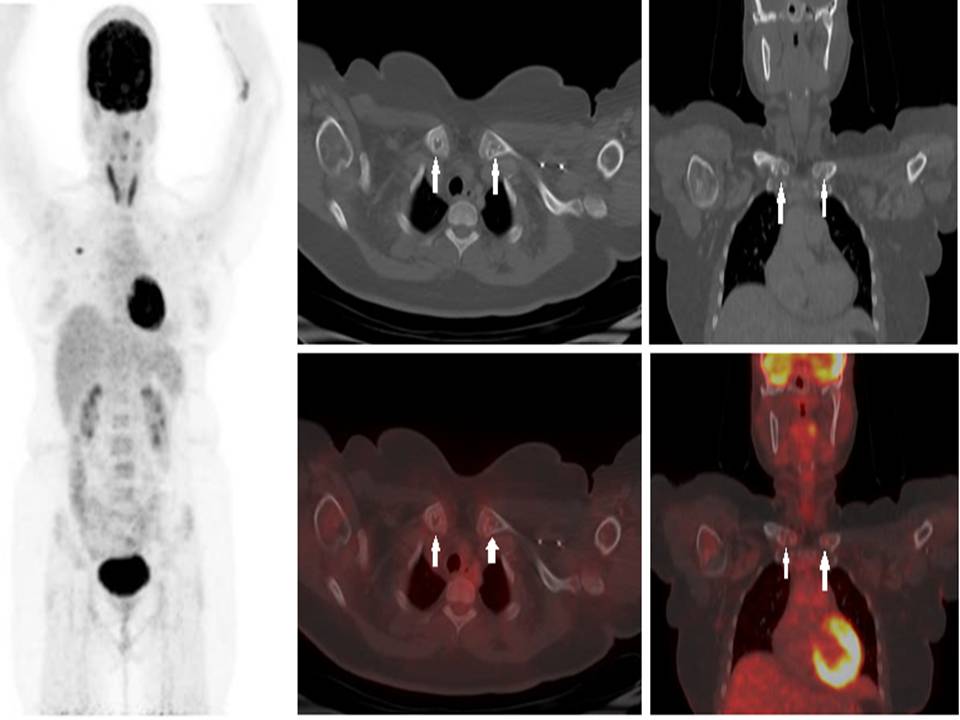 Scroll down for answers and discussion.

If a finding is bilateral and symmetrical, a probable anatomical/physiological should be considered possible. Usually lytic skeletal metastases from breast carcinoma are FDG avid and more commonly involve axial skeleton. Isolated lytic clavicular metastases occurring bilaterally without any FDG uptake is unlikely. (1)

Even though osteomyelitis appears as lytic lesion on CT, it is usually FDG avid on PET and may be associated with abscess or soft tissue component. It is also unusual to occur as isolated bilateral symmetrical clavicular osteomyelitis (2).

Rhomboid fossa is normal depression along the inferomedial aspect of the clavicle, which is attachment site of the costoclavicular (rhomboid) ligament. It appears as osteolytic defect or irregularity on CT. It may also appear as a tuberosity.  Its may be confused with pathological conditions like osteomyelitis or lytic metastasis, particularly during unilateral occurrence (3, 4).

Fossa ovalis (Thigh) – otherwise known as saphenous opening is seen at the upper and medial part of the thigh, a large oval-shaped aperture in the fascia lata. It transmits the great saphenous vein, and other smaller vessels. (5)

Fossa ovalis (Heart) is an oval depression of interatrial septum, present toward the right atrium above and to the left of the orifice of inferior vena cava. (6)